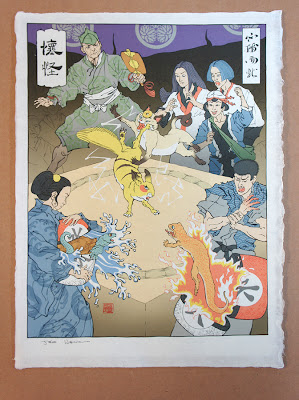 We are happy to once again go to the Sakura Matsuri Cherry Blossom Festival at the Brooklyn Botanical Gardens!We will be mainly hanging out at the Osborne Garden, the Japanese Hill-and-Pond Garden or the Terrace Cafe on both days. We will be all over the place so make sure be on the lookout for the StreetPass NYC Flag!If you find us, we are glad to announce that we are bringing back the Nintendo Themed Origami Paper for FREE which we have not done since the Japan Day Festival in May 2011!
Bring your most Japanese-ish Nintendo 3DS games such as Fire Emblem Awakening, Monster Hunter Ultimate, Sakura Samurai: Art of the Sword, Ikachan, Naruto: Powerful Shippuden, Dragon Ball Heroes: Ultimate Mission, Shin Megami Tensei Demon Summoner: Soul Hackers, Pokemon Mystery Dungeon: Gates to Infinity, HarmoKnight, Liberation Maiden and more! 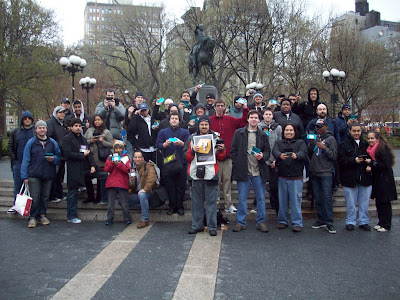 On April 14th between 2:00 PM and 5:00 PM, the group again will once again for the second time gather Union Square Plaza in New York City (in front of the 1856 House Mounted George Washington Statue) to quote, “Exchange StreetPass Data, play games head to head, take 3D photos and chat about upcoming Nintendo 3DS and Wii U news.”
Giant AR Cards will be displayed and handed out near the end of the gathering to people who attend. Select StreetPass NYC Admins and Group Members will be given special gold medallions to be honored for their selfless achievements through the two year legacy of the organization. They will be then interviewed for StreetPass NYC's YouTube Channel.
In the case of rain or any problems with the location, StreetPass NYC will meet up at the GameStop (32 E 14th St, New York, NY) right across the street of the original location.
Nintendo, Nintendo 3DS, Nintendo DS, Wii U and StreetPass are copyright and/or registered trademarks of Nintendo of America Inc. StreetPass NYC is NOT affiliated with or representative of Nintendo of America Inc or the Nintendo World Store staff.

Two years ago the Gameboy Advance launched and has taken the United States by storm, debuting on June 11th at the Pokemon Center in New York City. Since then, enthused fans have set up monthly meetings around the world to revel in the improved Four Player Link Cable of the new 16-it 512 simultaneous colors handheld. For more information please visit the Official Nintendo Website.

The Nintendo New York Link Cable is a subset of the much larger, global-wide grassroots Nintendo Link Cable network of meetings popping up all over the globe from America to Japan and South Africa. Their goal is for fans of the Gameboy Advance system to interact face to face in a groovy public venue and to promote a totally boss public image of Nintendo Fans in the New York Metro Area along with the official Nintendo Street Team.

Jordan Grey, Founder of the Nintendo New York Link Cable, is excited for the group's first meet up TODAY, Monday April 1st where a legion of fans will descend upon Video Games New York (202 E 6th Street, New York, New York 10003) to trade Pokemon in the recently released Ruby and Sapphire game for the GBA as well as play multiplayer games and talk about upcoming GBA and Gamecube news.

(NOTE: Not an April Fools Joke, Join Us Here: http://streetpassnyc.blogspot.com/2013/03/april-fools-meet-up-surprise-with.html )

"After being invited to the Cube Club in New York, I was inspired to make local meet ups to meet my fellow Nintendo gamers so we can play freakin' awesome Gameboy Advance games and rounds of Smash Brothers Melee" said Jordan Grey. "While off to a slow start I expect huge things from this totally hardcore system and I also cant wait to talk about this rumored Gameboy Advance 2 everyone is talking about. Supposedly it squirts water at you and also has two screens! Rumors are crazy I tell you, how can anyone play with TWO screens?"

The group can be found at these popular online portals as well as be contacted online via IRC at irc.freenode.net #nintendonylinkcable: